DoubleTree by Hilton Toronto Downtown ****
Location, services, amenities, rates, overall good reputation: these hotels are a good fit for LGBTQ travelers. We haven’t been able to vet their welcoming attitude and acceptance of the LGBTQ community yet.
This is an Instant Booking. The host agreed to automatically accept booking requests. Once your payment is processed, your booking is confirmed.
Hotel room • Toronto
Parking
Rated Exceptional 4.84 (2 reviews)
Parking 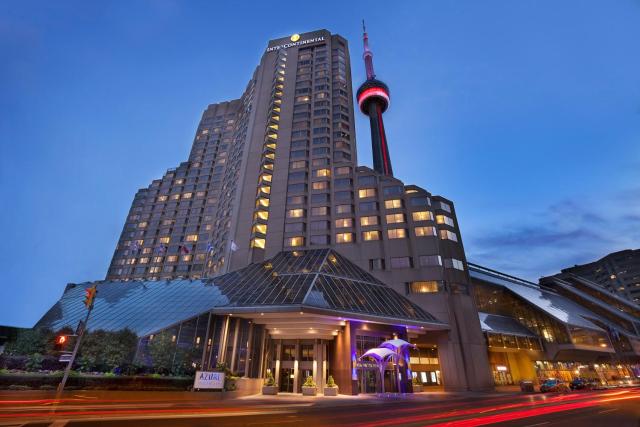 InterContinental Toronto Centre, an IHG Hotel ****
Location, services, amenities, rates, overall good reputation: these hotels are a good fit for LGBTQ travelers. We haven’t been able to vet their welcoming attitude and acceptance of the LGBTQ community yet.
This is an Instant Booking. The host agreed to automatically accept booking requests. Once your payment is processed, your booking is confirmed.
Hotel room • Toronto
Hot tub • Parking
Rated Exceptional 4.88 (1 review)
Hot tub • Parking

Discover our hotel offering and connect with other misterb&b guests in the same hotel/city.

If you are itching to explore the Great White North, look no further, Toronto has a plethora of attractions that cater to the gay crowd. Located in Ontario, with a population of nearly three million, Toronto is the most populated city in the country, where variety and diversity are abound. The area around Church and Wellesley Streets, also known as The Village, is seen as a gay mecca of sorts, and all of your needs and entertainment can be found in this small, yet vibrantly cultured enclave.

Nestled in-between St. James Town and Downtown Toronto, The Village is easily accessible for those seeking a local gay experience. The Village has long been a welcoming neighborhood, with the area said to have been established as a gay community as early as the 1800s. This history of sexual freedom and acceptance within the area continues to encourage people to showcase their individuality here to this day.

Social activity is a core part of the gay Toronto lifestyle. Unsurprisingly, most attractions can be found on Church Street, including LGBTQ-centric shops, restaurants, and a long list of gay bars such as Black Eagle and Fly. You can even plan a fun night out to see a drag show at Crews & Tangos! The community also hosts the annual Pride Festival, which is one of the largest gay prides in the world. Each year, many celebrities and LGBTQ icons make their way to Toronto to perform and celebrate gay rights. If you plan to visit Toronto in late June, be sure not to miss this lively festivity and experience your pride!

Because of The Village's central location, it is also easy to explore other appealing activities outside of the neighborhood specifically. For any aquatic admirers, Lake Ontario is only a few kilometers away, and you can opt to travel on the ferry services held at Harbour Square Park. Just adjacent to the neighborhood is the Royal Ontario Museum, where you can see and learn about both prehistoric and modern marvels, and brush up on some local history. For a more architectural delight, there are various landmarks such as the Gothic-style Casa Loma, where you can revel in the beauty of an intricate castle.

As far as gay accommodation is concerned, the LGBTQ traveler has plenty of options. misterb&b is a great way to find gay-friendly rooms, and if you are traveling with others, there are also entire apartments to stay in while you are in Toronto. Alternatively, the gay hotel scene in Toronto is also diverse and widespread, with both high-end accommodation such as Mariott and Ramada, as well as economy options such as the Downtown Home Inn on offer. So no matter if you are looking to travel luxuriously, or on a budget, Toronto surely has a variety of gay accommodation that is right for you.