Already $140,000 raised! Join our Crowdfunding Campaign (from $100 USD) and help us continue to create a more welcoming world

Top Spots for a Weekend Getaway This Fall
by Lachlan

The seasons are turning, and we can imagine your travel trends are too. As the days get that little bit shorter, and those nights just that tad bit cooler, travel inspiration turns to brisk walks in the forest and cozy evenings by the fire. That is unless you can still access somewhere warm of course! Additionally with Covid-19 still circulating, and various travel restrictions implemented across the globe, short-term domestic getaways seem like the norm right now. To keep your travel spirits flying high, we’ve compiled a catalogue of destinations where you can spend the perfect weekend getaway this Fall. So grab your best scarf, a fashionable face mask, and make the most of the new season. 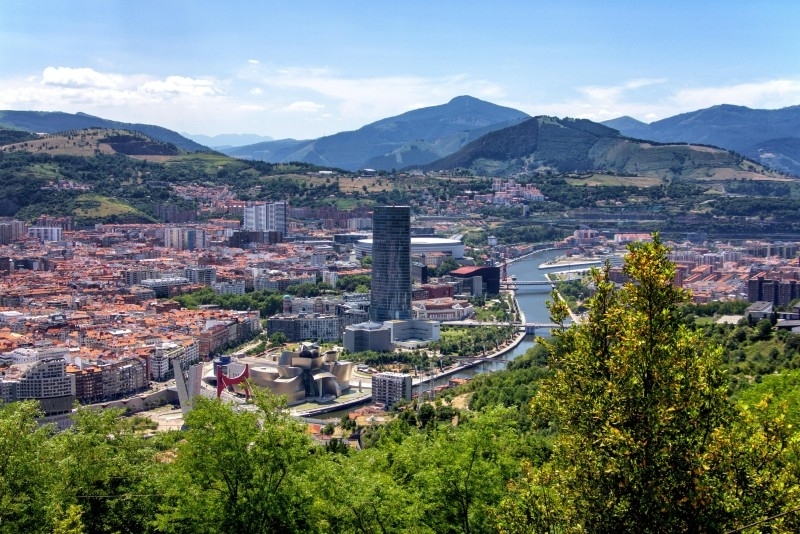 Foodie or not, a trip to Basque Country is a must in Europe this Fall. But even if you arrive indifferent to the region’s iconic ‘pintxos’ (the local interpretation of the better known tapas) you’re certain to leave wanting another serve. San Sebastian is often referred to as the pearl of Basque Country, and has the largest number of Michelin Star restaurants per square meter in the whole of Europe. But eating here is done a little differently. Rather than settling into one restaurant for the evening, the goal is to stop by as many as possible. Grab a drink at the bar, dig into one or two pintxos, then move onto the next. While it might sound like a sport in itself, you’ll be too busy eating and drinking to notice! Art and architecture lovers will also rejoice in a trip to the region’s sister city, Bilbao. Also on the coast, Bilbao offers some cutting edge architecture, including the titanium-clad Guggenheim Museum. 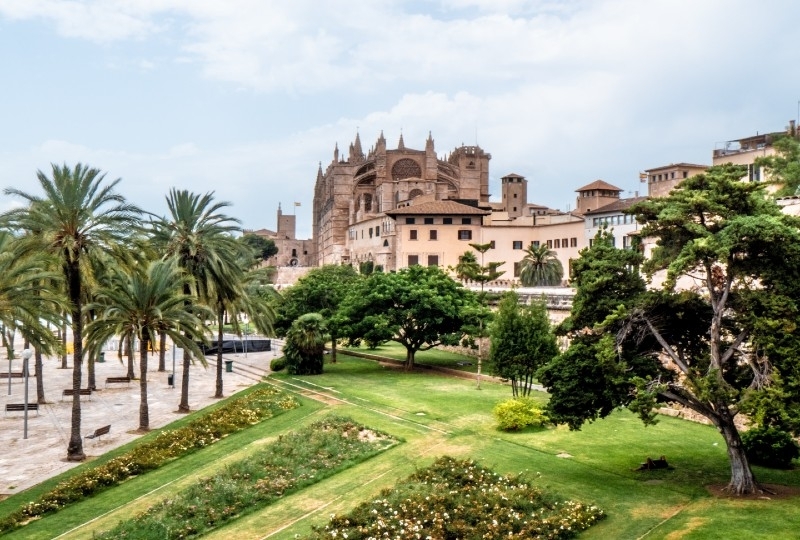 Hoping to chase that last bit of sun in Europe before everything moves indoors? You need to get yourself to Mallorca. Dotted in the Mediterranean in between Ibiza and Manorca, Mallorca is the kind of place that’s just made for a relaxing sojourn in the sun. And it’s main city, Palma, is also fun to boot. Enjoy the beach by day (should the weather permit) then do a food crawl through the city’s many tapas restaurants, which serve everything from tortilla and roasted peppers to fresh seafood. Religious or not, a visit to the city’s grandiose Catedral de Mallorca (La Seo) should also feature on your list of attractions. Overlooking the city’s harbour, the Gothic sandstone cathedral dates back to the 13th century, but was actually not completed until the 17th century. Located by the city center, you can head for a sangria after, and bid a toast to Fall. 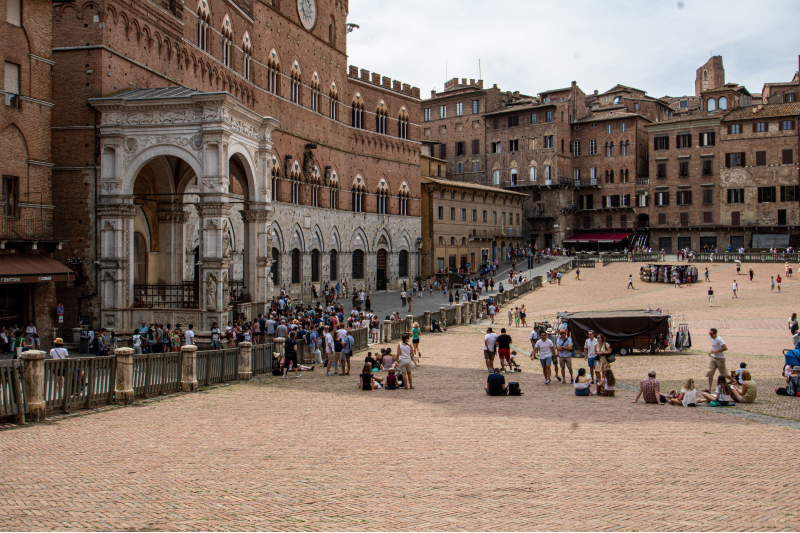 When you first think of Italy, thoughts generally orient towards Venice, the Colosseum, and dreamy Tuscany. While people traveling to Italy are currently subject to various restrictions concerning Covid-19, Tuscany is the ideal place for a Fall getaway - if you can get there that is! A picturesque region in between Milan and Rome, Tuscany is home to some of Italy’s finest cities. Get your art fix in Florence, and stop by the Uffizi Galleria to see Boticelli’s famed Rising of Venus, and the Galleria dell'Accademia for Da Vinci’s David. Then head north to Siena. While locals deem Florence and Siena as rival cities, both have equal merit according to us. Lose yourself in the city’s UNESCO heritage old town, before digging into some dreamy pasta for the night. 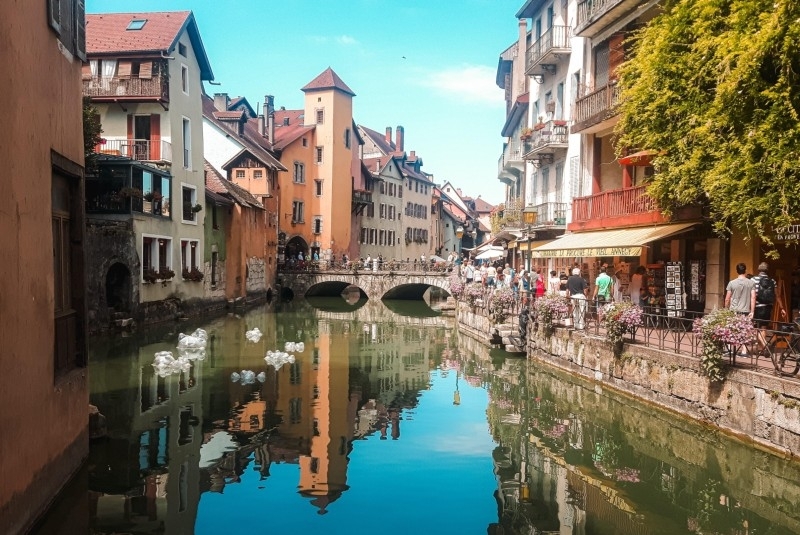 Inconspicuously located between Lyon and Geneva, and wedged beside alpine mountain ranges, Annecy sometimes gets overlooked as a travel destination. But we’re here to tell you that it shouldn’t. Reminiscent of a winter fairytale village, this dreamy town is arguably one of France’s most Swiss towns. After all, it is only a 45-minute drive from the Swiss border. But don’t let the town’s proximity to Geneva be a distraction, Annecy is stimulating enough for a weekend getaway in its entirety. The glistening lake Annecy is the town’s crowning jewel, and is regarded as Europe’s cleanest lake. But remember we’re in Fall, so swimming may be less desirable this time around! But it’s not just the lake and its mountainous backdrop that’s an Instagramer’s dream. Downtown, venture to the Palais de L’Isle - a 12th century building suspended in water, which has served as a prison, a courthouse, and an administrative center throughout history. 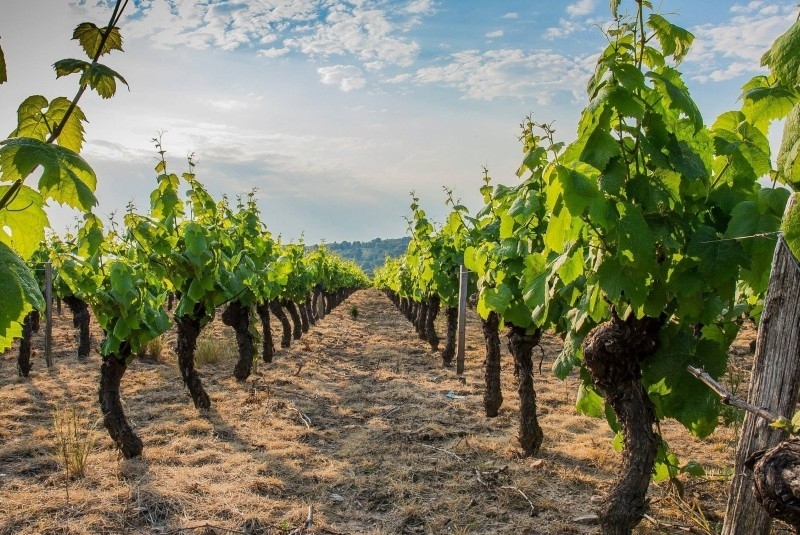 When the temperatures start to cool, terrace sessions with a cold beer generally give way to cozier moments with a glass or two of red. When this happens, nothing beats a visit to the wineries. Should you be in France, and within easy reach, we recommend a Fall vacay to the revered Vignobles de Beaujolais. Every year on the third Thursday of November, the new Beaujolais (Beaujolais Nouveau) is released, after only a few weeks of fermentation. The tradition is globally recognized, with many Americans even deeming it the wine for Thanksgiving. The Beaujolais region is situated roughly a 45-minute drive north of Lyon, and offers a series of vineyards which specialize in the Gamay grape: now considered to be a hybrid of the pinot noir and the ancient white variety, Gouais. If you struggle to find accommodation in the region, Lyon is also a perfect weekend pitstop, offering a robust cuisine to soak up a day of quaffing at the wineries! 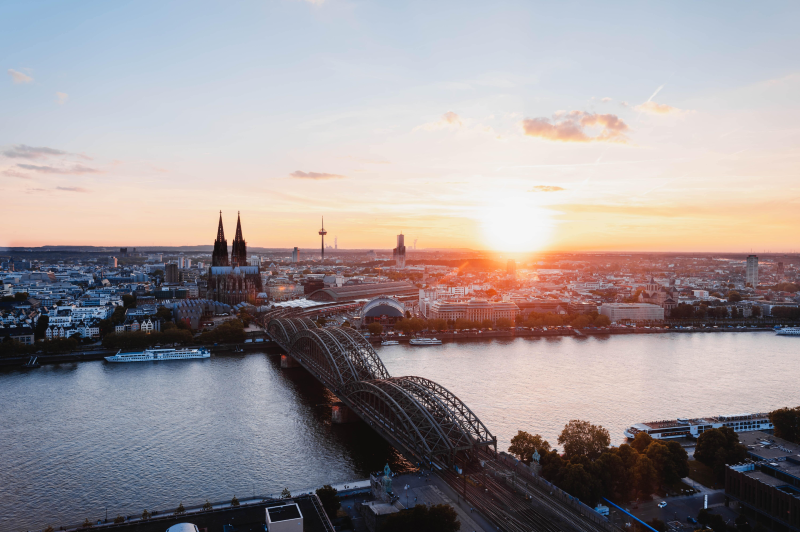 When we said domestic weekend escapes, we didn’t just mean remote places. If you have a hankering for a short-term city trip, and happen to be in Germany, Cologne is a great shout. While Cologne is aesthetically a little industrial, the city’s charm lies in its vibrant LGBTQ scene and its equally vibrant locals, referred to as Kölsche. At this stage, there are no local lockdowns in Cologne, meaning you can venture to the city’s main gay street, Schaafenstraße. Sip a Kolsch beer with the locals, but just remember some social distancing! Fall is a great time to visit Cologne, and we suggest heading to the immense River Rhein, where you can take a stroll along the promenade. Another asset of Cologne is its proximity to other cities in the area, including Düsseldorf, Bonn, and Essen. If you have the time, why not visit each, and appreciate the variations of local beer? Some with surprise for sure! 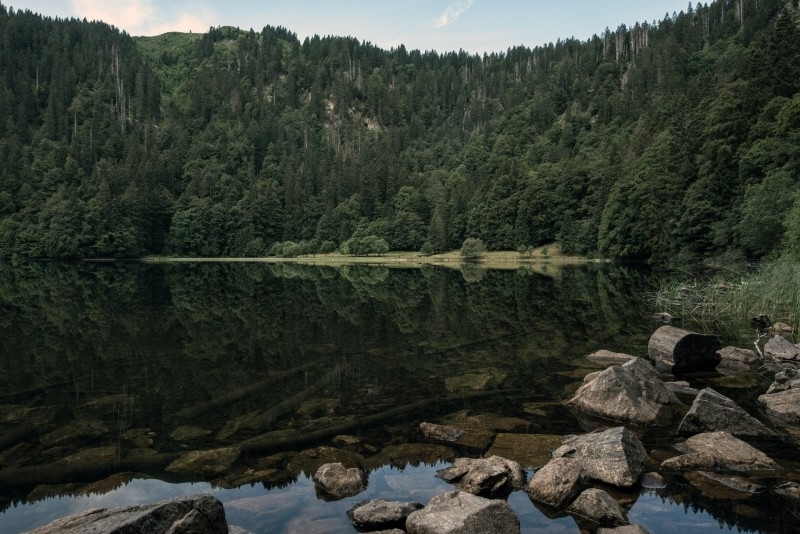 When you think of a Fall getaway, we imagine your thoughts orient towards a brisk stroll through a forest, resplendent in golden and orange leaves. If this is your perfect idea for a weekend getaway, then we recommend a visit to Germany’s famous Black Forest - locally referred to as the Schwarzwald National Park. The Black Forest covers an area of 10,062 hectares, and is located roughly a two-hour drive from Stuttgart and a one-hour drive from Strasbourg. Whether you’re team France or team Germany, access to the forest is easy from each city, so take your pick and enjoy a weekend city escape paired with forest hikes and plenty of photo opportunities. Alternatively, check out our round-up of Germany’s best naturist spas, where you can unwind after a day of exercise. 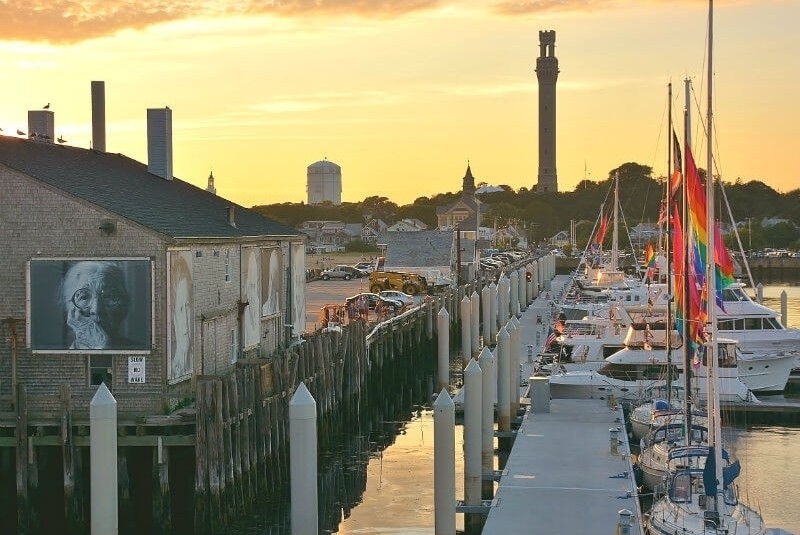 In terms of a Fall getaway in the States, we imagine you probably beat us to the post in imagining a trip to Provincetown. This dreamy destination on the northern tip of Cape Cod, Massachusetts, has long been regarded as a haven for all members of the LGBTQ community. Often referred to as Ptown, the town was already popular among artists, writers, actors, and poets in the 1920s and 30s, and it was this avant-garde attitude that eventually attracted the LGBTQ community in the 1960s. In the 1970s, the Provincetown Business Guild was created to promote local gay businesses, and today the PBG owns roughly 200 businesses. Most of the LGBTQ action can be found along the city’s main thoroughfare, Commercial Street, which always offers a good time come rain or shine. Just a 90-minute ferry ride from Boston, add Ptown to your list of Fall destinations, and you’re sure to end 2020 with a smile. 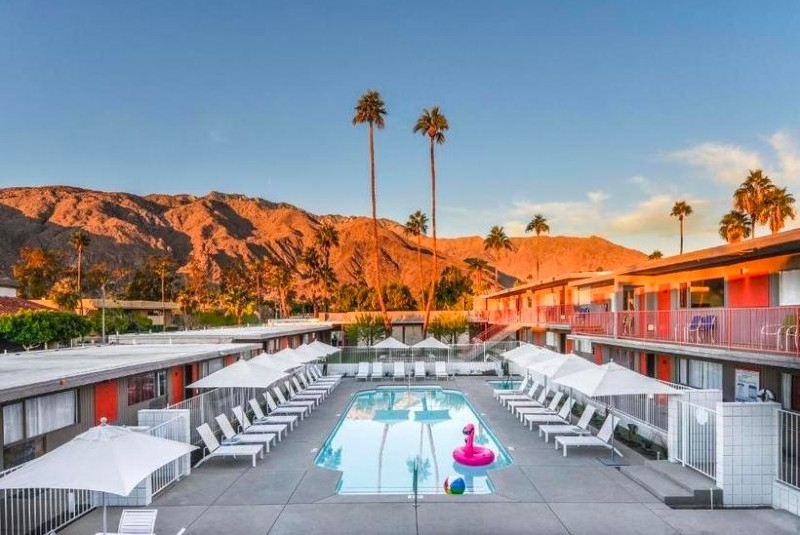 In or around Los Angeles, and craving a little downtime? Why not head to popular Palm Springs for the weekend, and soak up some LGBTQ culture in the heart of the Coachella Valley? Referred to as a desert oasis, Palm Springs is renowned for its wired palms that are offset by the imposing mountain ranges in the background. But Palm Springs goes beyond this. Over the years, the city has become a stronghold for LGBTQ culture, and in January 2018, Palm Springs introduced America’s first entirely LGBTQ city government. Today, Palm Springs is home to roughly 130 resorts and hotels, along with loads of misterb&b listings. So if you don’t need to fork out much cash to get to Palm Springs, why not lash out and stay somewhere fabulous for the weekend and forget that the cold season was even approaching? 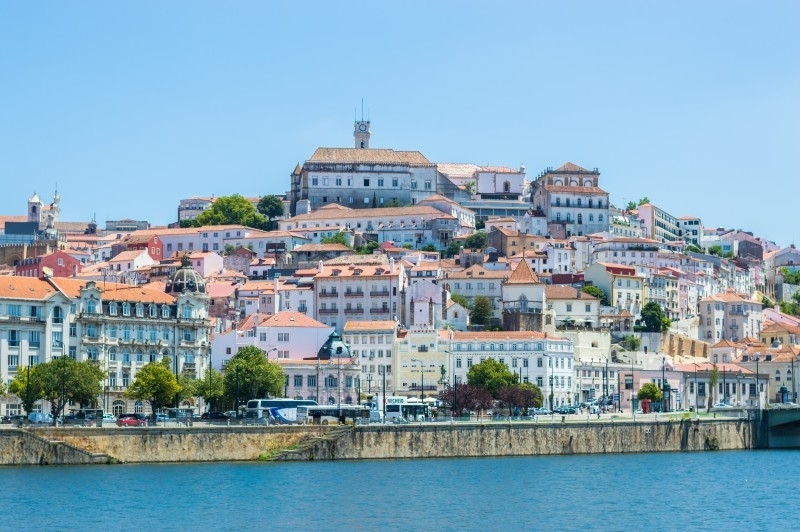 Already drunk Port in Porto and lost yourself in the colorful alleys of Lisbon? If Portugal is beckoning this Fall, perhaps it’s time to make a trip up north to Coimbra. Regarded as Portugal’s university city, Comibra packs a punch in terms of its youthful spirit and progressive student ideals. This spirit is largely thanks to the University of Coimbra, which was established in 1290, and remains the oldest academic institution in the Portuguese-speaking world. But Coimbra’s historical status goes beyond the university. For 100 years, Coimbra was the medieval capital of Portugal, and much of its architecture today including gothic churches and aqueducts is a nod to the city’s former status. Despite Coimbra’s modern student vibe, you can still enjoy many tenets of Portuguese tradition here, including authentic cuisine and Fado music.

Loved this? Why not check out our round-up of The World's Most Unique LGBTQ-Friendly Hotels?

Who'll be your next misterb&b host in Florence?

Best misterb&b Apartments and LGBTQ-friendly Hotels for a Staycation

Top Spots for a Weekend Getaway This Fall

9 LGBTQ Hacks on Lockdown and Restrictions 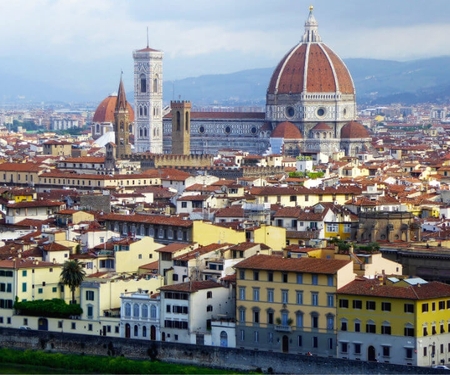 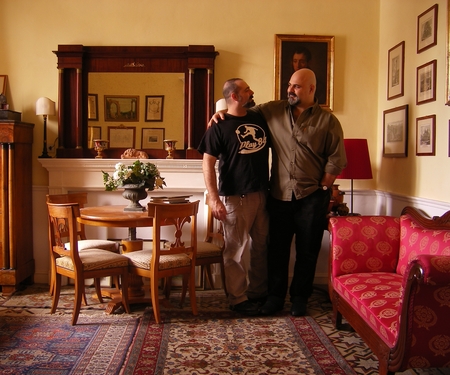 Host story Florence: The kindness of strangers
Reactivate my account
Book your next gay trip with misterb&b and be welcomed in 1 million LGBTQ-friendly accommodations in 200 countries Search now
By using this website, you consent to the use of cookies for analytics purposes