Tahiti, journey of a lifetime
by misterb&b 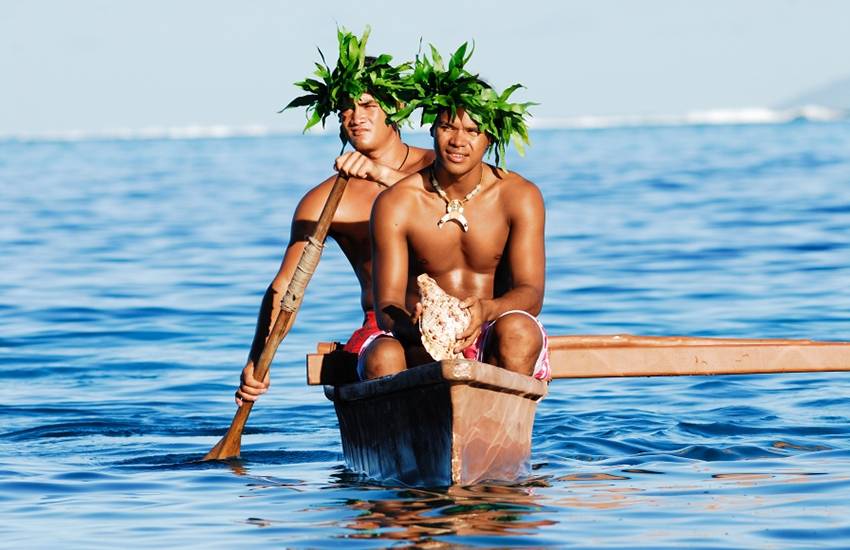 There, at the other end of the earth, in the heart of the South Pacific, lies a mythical land. Tahiti... The island at the end of the world par excellence, the dream of a lifetime, the absolute and eternal symbol of paradise on earth, the perfect setting for your most tender vacation for two. As soon as you arrive, prepare yourself for a sensory upheaval.

First the colors: the blues of the lagoons, the variations of the coral, the white of the sands, the green of the luxuriant jungle of the mountains. And the black pearls.

Then the smells. Get drunk on vanilla, drown in the scent of tiare flower, succumb to the scent of monoi. Breathe in.

Also feel how the pink sand flows between your fingers. Touch these satiny skins, weighed down with monoi, adorned with the mysterious patterns of the Maohi tattoos that the gods taught men, jealous of so much beauty.

Taste the tropical fruits, the coconut, the vanilla sauces that will accompany your fish. Dare to try new flavors.

Nature, culture, romance
Finally, let yourself go to the sounds of Polynesia. First, the rolling language. And then the songs, the sound of the ukulele, the percussion rhythms that accompany the traditional dancers, so sensual.

Here is, in a few pictures, the magic in which you will dive. Between lagoons and stilts, the reality of this land lives up to the myth: postcard landscapes, warm and smiling inhabitants, for an exclusive and authentic trip that combines nature, culture and romance.

Here are 5 archipelagos, spread over an area as large as Europe and so distinct from each other: the Society Islands, first, high islands, with their mountains (up to 2000 m), their lagoons and their coral reefs. You will land in Papeete, the administrative capital of Tahiti, which concentrates two thirds of the population.
If you have some time to spare, don't run away from the city, it is worth a stop.
A short hop away, Moorea, with its volcanic peaks.
A little further on, a name straight from paradise: Bora Bora, the pearl of the Pacific, set in the heart of its lagoon...

The Tuamotu, then, low islands, between sky and sea, the Polynesian postcard par excellence: atolls, pink sand, lagoons inside the motu (islets). It is a diver's paradise, with the most beautiful aquatic reserves in the world, such as the blue lagoon of Rangiroa. With or without tanks, you will share some magical moments with manta rays, reef sharks, turtles or barracudas.

Further on, the Marquesas Islands, high, wild, powerful islands. Here, no lagoons, but the original Polynesian culture, the one that had so seduced Gauguin or Brel.

Further south, the Australs, with their steep cliffs, where you can observe whales from July to October.

A stopover in Los Angeles
So how do you decide? The ideal duration recommended for such a distant trip is 12 to 20 nights in at least 2 archipelagos, with at least 3 islands and one atoll, to discover as many landscapes as possible. It's up to you to choose the ones that best suit your desires: lazing around, water sports, diving, hiking, parasailing, fishing, etc.

The trip is 22 hours flight from Paris, on board Air Tahiti Nui, with a stop in Los Angeles, where we advise you to stop for a few hours or even a few days on your way back, to cushion the descent from paradise... So is Polynesia a gay destination?
Definitely gay-friendly, yes! The great explorers of the 18th century were already astonished by the presence of mahu, these men/women, so particular to Polynesian culture, very difficult to translate into English.the presence of these men/women, so particular to Polynesian culture, is very difficult to translate into our Western concepts, and for centuries has maintained the fantasy of Polynesian multisexuality: the mahu, boys raised as girls, very effeminate, oscillate between gay, transvestite or transsexual for some. You will often meet them in the hotel or restaurant business.
If they have a real place in Polynesian society, you will also hear the term rae rae (say "re-re"), with a much more sexual and pejorative connotation.

In Polynesia, a French territory, the Pacs still cannot be registered, even if it is well recognized and if it applies there.
And if the Church knows how to make its clear positions on homosexuality heard, most of the big hotels and luxury resorts will offer you symbolic wedding ceremonies, even if they are not.the church is very vocal about its stance on homosexuality, but most luxury hotels and resorts will offer symbolic wedding ceremonies, or even traditional Polynesian wedding ceremonies with Polynesian naming, blessings, tattoos and flower crowns. However, you won't come to Polynesia to party and wander from bar to bar.
Polynesia remains an expensive, exclusive destination, a unique trip that you will share with your partner, to celebrate your union, to say or say again your love, to live a bit of paradise on earth. To the rhythm of the sun, you will touch the end of the earth.

Then, before returning, you will go to the beach one last time and throw a flower necklace into the ocean, making sure that the current brings it back to you. A guarantee that you'll come back. One day.

Who'll be your next misterb&b host in Papeete?

French Polynesia: The Ultimate adventurous Getaway
Book your next gay trip with misterb&b and be welcomed in 1 million LGBTQ+-friendly accommodations in 200 countries Search now